The imminent arrival of 5G creates opportunities and challenges to our industry and customers. We remain committed to protecting the satellite services and its continued development along this 5G journey

Shanghai Interactive Television Co. Ltd. (SiTV), under the Shanghai Media Group (SMG) and engaged in digital TV and video on demand businesses, is a user on AsiaSat 6 distributing 16 HDTV channels across China.

A 2.4m antenna at SMG monitoring site, locating at Shanghai’s Yangpu district, experienced a strong unknown interference, which led to severe pixelation and complete blackout of its reception as shown in Figure 1 below:

At SMG’s invitation, AsiaSat conducted an on-site troubleshooting together with SMG engineers. Based on the spectrum plots and the existence of two 5G base stations nearby, the issue was expected to be originated from a typical 5G signal interference. The spectrum plot as shown in Figure 2 below indicated a major signal interference within the 3400-3600 MHz range, with the strongest interference at 3550 MHz, the frequency band for 5G in China. 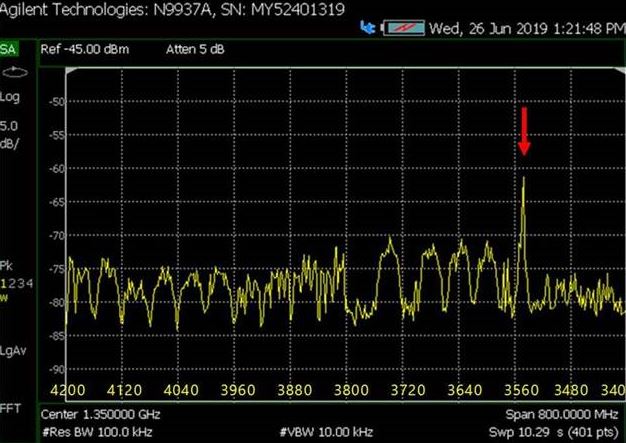 According to link budget analysis, using a 2.4m antenna to receive HD signals from a satellite transmitting at a downlink EIRP of 40 dBW and Modcod QPSK ¾, the link margin would be about 5 dB under normal condition. However, the actual observed interference signal was transmitting at much higher power, which was sufficient to create a saturation type of interference, thus causing degradation of picture quality or even screen black out.

After the root cause was identified, AsiaSat provided its self developed 5G bandpass filter (BPF) for SMG to install onto the H-pol output of its 2.4m antenna.

Figure 3. AsiaSat BPF installed onto the H-pol output of the antenna

The pre-LNB microwave BPF solution is the most cost-effective measure to mitigate 5G saturation interference by far. Despite affected by multiple interfering sources and interfering base stations as close as 100m, the AsiaSat BPF still functions effectively, ensuring signal reception remains unaffected. 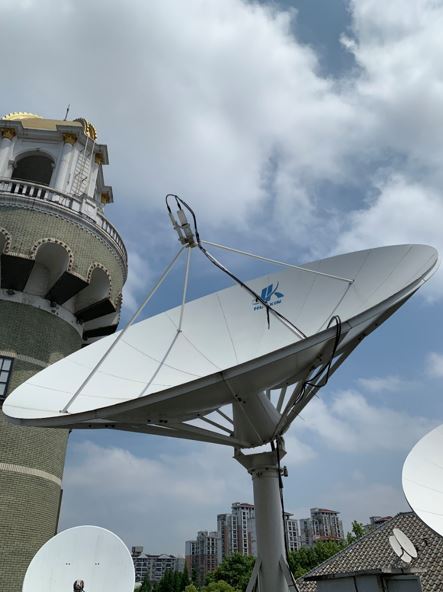